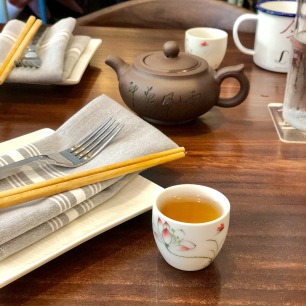 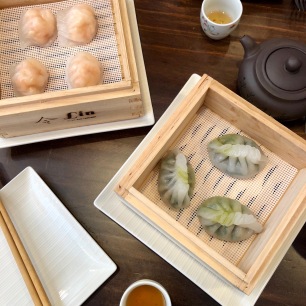 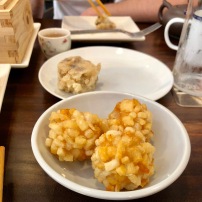 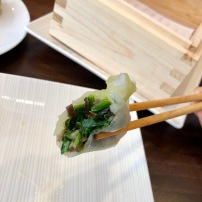 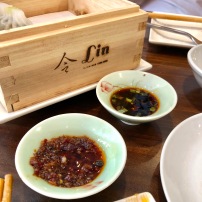 It was a bustling scene this morning at Chef Ling Qi Wu’s newly opened Asian Bar + Dim Sum Restaurant on West 6th Street. A line of Austin dim sum enthusiasts wound out the door, and spilled into the shade of the red-lantern adorned front patio for the restaurant’s very first Sunday Dim Sum Service.

My date and I luckily put our names down just in time for one of the last-available seatings, and then killed some of our hour-long wait with tea and coffee at Clark’s Oyster Bar (just across the street).

We’d anticipated Lin’s opening since eating at the popular pop-up-turned-restaurant, Wu Chow, where Chef Ling shone as dim-sum chef. According to Lin’s official website, Chef Ling hails from the Fujian province of Southeast China, where her appreciation for her grandmother’s cooking first sparked her passion for Chinese cuisine, but honed her skills in dim sum making with instruction from William Wong and in the restaurants of NYC’s Chinatown. With this health-focused solo venture, she plans to avoid MSG and to source organic vegetables from local farmers.

Inside, the vibe was colorful and creative with elements such as a bright mural on brick, a swath of umbrellas hanging upside down from the ceiling, and orchids perched around the restaurant perhaps even cultivated by Chef Ling herself.

Servers dashed around the cozy space delivering large, square, steaming baskets from the open kitchen to the tables around us. Not quite up for a hair of the dog this Sunday, we sipped Jasmine tea instead of something from the bar, while making our selections from the Dim Sum Menu.

By this time, it was nearly 1:00 PM, and the kitchen had run out of Seafood Soup Dumplings, as well as Scallop Dumplings. From the 33 remaining options, we chose shrimp har kaw, steamed BBQ pork buns, turnip cake, spinach dumplings, and potato shrimp balls.

The shrimp har kaw came out first, each piece seemingly identical. The skin, translucent and perfectly pleated, held up easily when handled with chopsticks. The shrimp mixture inside was juicy and flavorful with the firm, bitable texture of great har kaw.¹

The same care was obvious in the spinach dumplings. The simplicity of the unseasoned mix of shiitake and spinach filling was to be savored, but one piece lightly dipped in soy made the perfect vessel for the stand-out house-made chili oil. Distinguished by a flavorful blend of scallops and shrimp paste, it’s thick enough to taste with a pinch of your chopsticks if you’ve accidentally inhaled all of your dumplings.

Next came the crispy, deep-fried turnip cakes, which were a departure from my usual preference for pan-fried. Because of the size of each piece, I was able to enjoy the crispy outer edges, while still having plenty of the soft, warm texture inside that I enjoy in pan-seared versions.

The potato shrimp balls were also fried, but in contrast to the light batter that coated the turnip cakes, the crunchy exterior was thick and textured. Nice, but filling, I didn’t protest when my date scarfed most of these down.

We finished with steamed BBQ pork buns, or “Char Siu Bao”. A bit tangy, a bit savory, a bit sweet, they left us too sated to consider Pineapple Puffs for dessert.